As the train gathered speed, Alice took a closer look at the other passengers on board. It was ‘standing room only’ in the most literal sense, as there were no seats, and many of the animals were not well-adapted to sit in seats anyway. There were squirrels, dormice, rabbits, oysters, hedgehogs, frogs, various birds and even an alpaca. The train was gathering speed rapidly now and Alice looked on in some alarm as some of the smaller animals began to roll towards the back.

“Eek!” said a squirrel, as it tried to cling to the hem of Alice’s trousers. They were going really fast. Alice looked out the window to find she could no longer see the ocean, just a racing blur of technicolour. Were they going faster than light? Alice began to tumble towards the back too, and suddenly felt she didn’t want to be on this train anymore; she was scared. Why couldn’t she have stayed on the beach, collecting shells?

“Ow!” she said, as she hit the back of the carriage, and dislodged a disgruntled hedgehog from behind her.

It was pandemonium: animals were piled up at the back of the train, all bickering with one another. Many of the birds had tried flying to keep up with the speed, but it was too fast for them, and they too were hurled towards the back; a large seagull was draped over the eyes of the alpaca, which was in turn draped across Alice and the other animals.

“I wonder were the gnat is?” said Alice.

“I’m right here,” said the tiny voice by Alice’s ear, and Alice fought the urge to swat at it.

“This is quite a way to travel, isn’t it?” said the gnat.

“Indeed!” said Alice. She was so vexed she could say nothing else.

“Trains have really gone downhill if you ask me!” said the hedgehog.

“No-one was asking you!” said the squirrel.

“Now, now, don’t bicker,” hooted an owl, who was spread in a most unbecoming way against the back of the carriage.

“Where are we going?” said Alice.

“To the White Tower, of course!” the animals all squeaked, hooted and chirped in reply.

“Because we want to go, stupid,” said the hedgehog. “Why else would we be here?”

Alice thought he was only grumpy because she’d squashed him slightly. She wondered when this terrible train journey would end.

The Cheshire Cat materialised then, in mid-air in front of Alice.

“Not really,” said Alice. “What is the point of this?”

“The train is a great metaphor for life, don’t you think?” said the Cheshire Cat. “It can be rather a bumpy ride.”

“That depends on your view,” said the Cheshire Cat. “I like to view things a different way.” And here he flipped over onto his back in mid-air and grinned at Alice, upside down.

“Who are you? And why are you different to all the other animals?”

“I’m a cat,” he said simply. “And don’t expect me to tell you my secrets, for we cats revel in mystery. But I am not the mystery you must solve. In this case, I am simply the messenger.”

“So, you’re not the one who’s behind all this?”

“Oh no – I’m a cat. I may know things humans don’t, but I’m no inventor. I think there’s someone you should meet. You’ll find him in the White Tower. Right at the very top, if you can find it.”

Eventually the train began to slow down, and it finally came to a stop at the bottom of a hill. Alice and all the animals unfurled themselves, grumbling, from the back of the train, and got off. Alice looked up at the hill. The White Tower stood on top of it, gleaming in the sunlight. She looked around as a flamingo pushed past and saw that all the animals and birds were heading off in another direction.

“Where are you going?” she called after them.

“To the Visitor’s Centre and Cafe,” they replied in unison. Alice shook her head and started walking up the hill.

“Goodbye,” said the tiny voice in her ear.

Alice reached the top in time to see the Cheshire Cat’s tail disappear through a half-open door at the foot of the tower. A biting wind came from nowhere and the door blew shut. Some butterflies flew past that were the colour of autumn leaves.

Alice walked up to the tower and stopped outside the small wooden door, which was painted a peeling blue.

She’d been wanting to come here for so long…

She took a deep breath and turned the handle.

In my darkest nights,
I wished to be a beast
To transcend my own reality.

I stood before the moon
And prayed for her to take me away,
So I could be free from the curse of daylight
And live amongst the shadows.

I could see no better way. 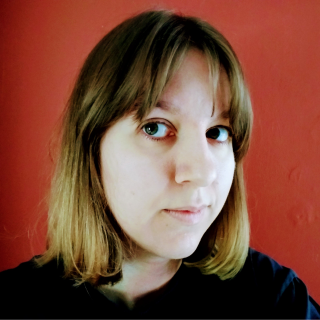 32. Female. Writer. Currently working on a novelette which is a spin-off of the Alice books by Lewis Carroll. Author of the self-published poetry pamphlet Autodestructsuperstar.